How Monsanto Created Over 60 Million Acres of Superweeds 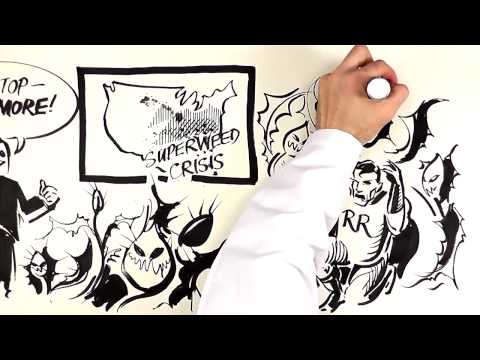 Roundup Ready seeds were excepted pretty fast, because weeds were detrimental to farming. Monsanto played the “superhero,” jumping in to save the day. Their Roundup herbicide seemed to be great, until weeds developed genes to resist it, becoming superweeds. The more Monsanto’s Roundup Ready system was used, the stronger the resistance genes became in the weeds, developing into a super weed crisis.

Again, Monsanto stepped in, playing the “super hero again” to genetically modify seeds to resist these herbicides (as mentioned earlier). Today, we have multiple countries around the world banning these GM products and the herbicides that go with them. This is due to the fact that there is an enormous about of information that suggests they are not safe to consume.

“It sounds like a bad sic-fi movie or something out of The Twilight Zone. But ‘superweeds’ are real and they’re infesting America’s croplands. Overuse of Monsanto’s ‘Roundup Ready’ seeds and herbicides in our industrial farming system is largely to blame. And if we’re not careful the industry proposed ‘solutions’ could make this epidemic much worse. Monsanto and other agribusiness companies are now touting herbicide resistant crops engineered to withstand older, more toxic herbicides as the solution. These new herbicides will certainly exacerbate the problem, but in crewse the companies’ bottom lines. It’s a highly risky move. Increased herbicides use on the new engineered crops will speed up weed resistance, leaving no viable herbicide alternatives. This is a dangerous chemical cocktail, that when combined with the current farming systems, is a recipe for disaster”

How Monsanto Created Over 60 Million Acres of Superweeds

Is there any GMO-Chemtrail connection?