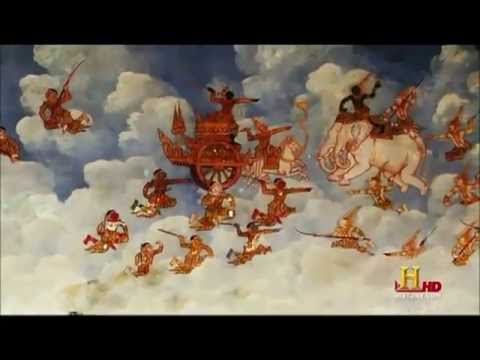 Dr. Oppenheimer said of himself when he had created (with his team) a nuclear weapon "Now I am become death, the destroyer of worlds."

Interestingly in an interview 7 years later he confirmed that "Ancient Cities whose brick and stone walls have literally been vitrified, that is fused together exist in India, Ireland, Scotland, France, Turkey and other places".

We have known for some time that the Mahabharata describes, what were considered to be outrageous claims of apparatus and bombs (because they were then unknown technology when the work was translated into English etc)

Some time ago despite knowing that both Harappa and Mohenjo Daro in Pakistan were radioactive sites, another site was discovered in India highly radioactive and from the article on veda.wikidot.com is dated back some 8000 to 10000 years old. Its effects are still being felt by a high percentage of birth defects in the area, where the Indian Authorities were building a new housing area. Another site which is basically a crater lake which is radioactive near Bombay was discovered. In order to create such a impact crater in basalt, a shock of some 600,000 atmospheres would have been needed and this site is dated as less than 50,000 years old.

A previous civilization with the technical know-how to build the pyramids etc has always been suspected but I wondered why I see so little about a civilization that had nuclear technology, especially when someone so distinguished as Dr Oppenheimer confirmed that many vitrified sites can only have got into that state by a nuclear explosion.

The ancient texts tell of technology that today would not surprise us:

Photographic and listening devices whereby conversations in other planes could be heard.
Making planes that could not:
Break,
Catch Fire,
Be Destroyed,
Be Cut - now that suggests to me made to withstand laser weapons whilst in the air (I hardly think they worried about sabotage on the ground and chain saws.
Motionless - that suggests Harrier ability.

What intrigues me is that archaeology seems to concentrate - or is financed to avoid looking at evidence for a previous highly technological society. If one thinks about it how much would we have left after nuclear explosions which the article suggests were the same size as Hiroshima etc and how far down would we have to excavate and in an extremely dangerous environment.

For me Dr Oppenheimer view opens up several possibilities:

Either we did have a highly advanced civilization such as possibly Atlantis with nuclear capability and war broke out, or Mankind did not have nuclear technology at all, but aliens did and fought a war among themselves on and over this planet thereby depleting their numbers and humanity, or Aliens decided to do away with mankind or at least cull its numbers and bombed the largest areas of civilization or the most troublesome groups of peoples.