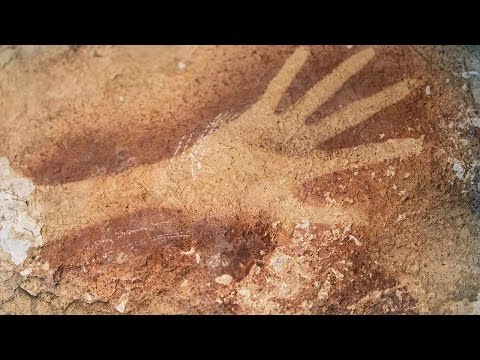 A cave in Indonesia that’s home to some of the oldest paintings in the world.

The hand stencils and paintings of animals were created between 35,000 and 40,000 years ago – making them at least as old as similar artwork in Europe.

Here, using uranium-series dating of coralloid speleothems directly associated with 12 human hand stencils and two figurative animal depictions from seven cave sites in the Maros karsts of Sulawesi, we show that rock art traditions on this Indonesian island are at least compatible in age with the oldest European art.


The earliest dated image from Maros, with a minimum age of 40 thousand years, is now the oldest known hand stencil in the world.

In addition, a painting of a babirusa (‘pig-deer’) made at least 35.4 thousand years ago is among the earliest dated figurative depictions worldwide, if not the earliest one.

Among the implications, it can now be demonstrated that humans were producing rock art by 40 thousand years ago at opposite ends of the Pleistocene Eurasian world.